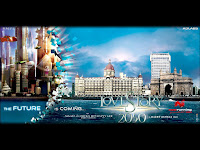 A still from Love Story -2050:courtesy-Now Running
We have just concluded a lively discussion on Yahoo Indian Science Fiction Group on Indian si fi movies.You could access the link and read yourself.
I only knew that there are only a very few movies which could be nominated under the scifi category ;I was surprised to know that there are many .
Er.Bimal Shrivastava and Dr.C.M. Nautiyal ,both renowned science communicators knew much more about the subject and upgraded my already meagre knowledge on Indian Movies.
I am tempted to quote here both these authorities .See what they say on it.
Dr.Chandra Mohan Nautiyal:
"While several books/ stories from classic literature of several Indian languages, especially of Hindi and Bangala, have been turned into films, hardly any Indian movie qualifies to be a real Sci- Fi. The first Indian movie (in Hindi) which had some element of Sci-Fi in it was Wahan ke Log (people from there) and included visitors from Mars in its story. It was made in 1967 by Nisar Ahmad Ansari with a good star cast but the film sank. Naturally, then there was a lull.
After more than 3 decades came Koi Mil Gaya (a main stream Hindi block- buster) which talked of attempts to communicate with ET and visit of a solar energy- dependent creatures from outside the earth. In between, there had been several television serials but no films. However, things seem to be changing now with about 6 films on floor, all claimed to be science fiction . These are main stream movies with one of them having the highest budget (US $ 25 million) to date for a Hindi movie. However, it is pre- mature to say whether these are going to be real science fiction, science fantasy or just fantasy with gizmos. "
Reference:
[http://jcom.sissa.it/archive/07/02/Jcom0702(2008)A01/]
And now see what Er.Bimal Shrivastavaa shares with us on the issue:
Well I can add a few more films that had been produced in past and which could be termed as Sc-fi.The one which I remember was in 1956 or 57 named as "Mr. X" starred by Ashok Kumar and perhaps Nalini Jaywant. The film was based on the story of a Professor trying to develop the medicine of Cancer, inadvertently produces a chemical that makes a man to disappear. It was a successful and highly popular film because of its good story and very good & super hit songs. Subsequently a lot many sequels were made on similar topics e.g. "Mr. X in Bombay".Some more Sc-fi films were made on the topics of space travel (e.g. "Rocket Girl", where the Hero & Heroine try to go to Moon by a Rocket). However, none of the films could earn success.[Bimal ]
Trust you shall find the whole discussion informative and interesting.
Posted by Arvind Mishra at 3:29 AM 14 comments: