First Ever National Discussion on sf: A News Round-Up

The First Ever National Discussion 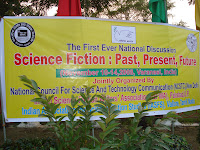 Can you imagine having a barbecue ethnic dinner on the holy bank of the Ganges after having a full view of the light of earthen lamps on the Ghats of the Ganges? Can you imagine a puppet show at the beginning of a conference and Shehnai Vaadan by the nephew of Shehnai maestro Bharat Ratn Late Ustad Bismillah Khan and also a magic show and other recreational activities including fun fishing and primordial soup making contest to commemorate the concept of origin and evolution of life as a curtain raiser to Darwin's bicentenary celebrations due in India next year . These activities were organized as stress releasers after the day long strenuous schedule of the discussions on two of the nights of the conference before dinner on the lawns of the resort under moonlit night and a visit to Sarnath, the famous Buddhist pilgrimage. An excursion like ambiance was provided during the National Conference on SF by the ingenious, innovative and carefully through out programme by Dr. Arvind Mishra, the coordinator and convener of National Conference on S.F.

The First Ever national Discussion on Science Fiction jointly organized by National Council for Science and Technology Communication, Indian Science Fiction Writers Association and Indian Association for Science Fiction Studies was held as Sanjay Motels and Resorts, Varanasi from 10 to 14 November 2008. The conference began with a press conference in “Paradkar Smriti Bhawan’ at Maidagin ,Varanasi, which was addressed by Dr. Manoj Patairiaya , director NCSTC .Dr Arvind Mishra coordiantor/convener of the event outlined the objectives and details of the programme.

In the evening a puppet show on SF story of Zeashan H .Zaidy was presented by Arshad Umar, a puppeteer from Lucknow. Audience had a wonderful evening session of interacting and also viewing a short film by Mark Lund named "First World' .It was very much appreciated by the audience.The film envisaged that aliens have not only arrived clandestinely on earth but were living with us -a fact which is known by certain authorities but they are keeping it tight lipped.The highlight of the day was also a talk on World Science Day entitled ‘ Moon :Facts and Fictions’ by Dr Nellai S Muthu, scientist, Chennai in which be presented a detailed history of the expeditions to the moon.

The Conference was formally inaugurated in a grand function on 11th Nov. 2008. The Chief Guest on this occasion was Professor S.N. Dubey, Vice-Chancellor of JRH Chitrakoot University, U.P. The inaugural function was presided over by Dr. Manoj Patairiya, Director of NCSTC, New Delhi. The Key-note address was given by Marathi Science Fiction Writer Dr. Y.H. Deshpande. In his key-note address he traced the origin of Indian SF in the great epic Mahabharata. The Chief Guest, respectable Vice-Chancellor S.N. Dubey underlined the importance of reading science fiction for spreading science awareness. The other distinguished speakers who spoke on various aspects of science fiction were Dr.Madhu Pant , former director of BAL BHAWAN , New Delhi and Shri Hemant Kumar, a senior litterateur from Lucknow. The presidential address was given Dr. Manoj Patairiya; and the vote of thanks was proposed by Dr. R.R. Upadhyaya, President of ISFWA, Faizabad. On this occasion three books on/of SF by Dr. Ratnakar D Bhelkar, Mr Harish Goyal and Mr.Zeashan Haider Zaidy, were also released by the chief guest of the function.A message in the form of an erudite piece of sf critique by Hon. Justice Yatindra Singh,Allahabad High court was also released on the occasion.

The inaugural function was followed by two technical sessions. The first technical session was on the historical perspective of science fiction. The chairman of the session Professor S.M. Gupta opened the session by raising important issues to be discussed at the session such as science fiction, role of fantasy in SF, mythology and reinterpretation of mythology in SF and the futuristic vision of Science fiction Dr. Gauhar Raza made a distinction between an artist and a scientist and stated that an artist not only revisions future but also revisits and reinvents the past. But the study of science is accumulative in nature in that future scientific inventions are built on the past inventions. He emphasized the need for forging the future of SF rather than the analysis of its past history. Dr. Arvind Dubey, a pediatrician by profession and sf buff , emphasized the need to identity the first SF story. He rejected the view that Mary Shelley 's "Frankenstein" is the first SF in English. According to him Lucian's "True Story" (2nd Century A.D.) and Kepler's "Somnium" (1634) are the best contenders to be first S.F.

According to Dr. Arul Aram H.G. Well's novels have post-modernistic trend in them. He emphasized the need of social responsibility as a component of SF.Dr. CM Nautiyal drew a distinction between science fiction, science fantasy and fantasy. He said that in a true science fiction, science is integral and not incidental to the story but what may not pass this test , may still be good literature or good science fantasy. However, the result of the test may change with times and with readers' background. To write 'hard science fiction', one ought to know the laws of the related science. No Indian film passes the test. 'Koi Mil Gaya' comes the closest to being Sci-Fi-Fi but not good enough.

The Second Technical Session on Understanding Science Fiction-A Cognitive Approach began under the chairperson ship of Dr.Madhu Pant ,former director of BAL BHWAN New Delhi , The speakers outlined the current trends in SF. Dr Thirumani stated that contemporary sf is an easy way to understand science. Mr. Harish Goyal, a writer of Hindi SF made a case for prescribing science fiction in the curriculum at school and college levels. Mr Vishnu Prasad Chaturvedi underlined the importance of science element as a necessary component of SF.Amit Sarwal emphasized the need for curriculum development in SF in the literature classroom at undergraduate level by the UGC and hoped for grants to publish critical books on SF in order to equip teachers to teach this new subject.Mr. Mehrdad Anaseri presentation focused on 'Study of Tom Stoppard's Hapgood and Arcadia with cultural implications to India". "There is no need to go beyond reality to find utopias or dystopias," contended Mr.Anaseri adding that literature and cinema should shoulder the responsibility of focusing on "real" issues challenging modern science today, before depicting wild extrapolations. Mr. Mohan, one of the Tamil science fiction writers, presented his views on “SF in Science Propogation". Science Fiction writer Mr. Kamlesh Srivastava shared his views on the “Public Understanding of Science through SF”.

The third technical session was chaired by Dr. Vibhavari Deshpande and was devoted to the current trends in SF. Anwesha Maity presented a comparison between Japanese and Bengali SF and pointed out that both started as adventure stories. Reema Sarwal drew the attention of the audience to the similarities between SF and post colonial writings. Zakir Ali Rajnish , a noted SF writer for children pointed out the need to make SF interesting for children. Two joint papers were also presented on SF movies by M. Venkadeshan, M. Srividyas and NS Sampath Kumar and S. Valliganthans. They pointed out the special effects created by the Sf Cinema. Ratnakar Bhelkar stated that fantasy is not the opposite of reality but the other side of reality. Anil Kumar Vishwa and Jaiprakash pointed out that new trends in the form of reinterpretation of mythology are developing in SF.

On 12th November 2008, Technical Session-IV : Science Fiction for Science communication was chaired by well-known SF writer Mr. Unnikrishnan from Kerala. Dr. Geetha.B discussed various possibilities of using SF as a teaching tool in her paper on “SF as a Teaching Tool: Future Prospects”. She stressed that SF should be used in classrooms of various subjects and not only in language classes. Meenu Khare said that SF can be presented effectively through radio. "Animation films, cartoons and comic strips always attract children" said Amit Kumar. He stressed the need to produce SF comics and cartoon films so that difficult concepts of Science can be taught easily.Dr. Afrina Rizvi discussed the scientific content in SF by drawing the audience’s attention to Mary Shelley’s & H. G. Wells’ SF works.

In the V technical session Hemant Kumar spoke on the latest trends of SF। Zeashan Haider Zaidy pointed out the importance of SF and suggested the ways to popularize it। Amit Kumar presented a comparative study of Hindi mainstream stories with those of SF. Arshad Umar advocated the presentation of SF through puppetry. Dr.Taralika Trivedi was of the opinion that the fiction based on scientific theme can also be very much of a mainstream fiction. The paper discussed this doctrine comparing SF works with mainstream fiction .As soon as a great SF is written, critics stop calling it SF, but reclassify it as mainstream fiction.Many works unassumingly portray SF,remaining still very much in mainstream.Good SF is both good literature and good writing. The best SF is simply a genre of the best writing.

The greatest achievement of the conference was the preparation of the outlines of 'Benaras Document on SF 2008' under the leadership of Dr Manoj Patairiya. This document will contain definition of SF, scope of SF and ways and means of writing, training and popularizing science fiction in this country. The important suggestion that was put forward was the establishment of a SF cell to train young writers to write SF; to translate SF across Indian languages and into English.

The Valedictory function was held in the after noon of 13 Nov. 2008. The Chief Guest was Prof. S.N. Upadhaya the director of IIT Benaras . In this address, Prof. Upadhaya suggested the need to reinterpret Indian mythology to address to modern environmental problems of pollution. Dr Manoj Patairiya presented " Benaras Document on sf -2008' in its preliminary form and said that it will prove to be a landmark work document in the propagation of SF. The guest of hononour on this occasion were shri P.K. Mishra, Chief Co-ordinator IIP Cell B.H.U. and the function was presided over by R.K. Singh Chief Conservator of Forest H.P. The vote of thank, was proposed by Dr. Arvind Mishra, the coordinator and convener of the conference.

Posted by Arvind Mishra at 3:53 AM

If you strongly feel to say something on Indian SF please do so ! Your comment would be highly valued and appreciated !