This declaration is with a deep sense of satiation akin to  the one when you  get  a sacred ritual completed and last prayer performed. Science Fiction in India is now out as a result of a team work engaged in pursuit for an unexpected long time since the first ever National Discussion on Science Fiction which was organised in Varanasi.
The main objective of the discussion  was to focus on various aspects of science fiction and its role in communicating science and technology related issues to the common people and children. The five-day exercise culminated in to preparing a draft for "Banaras Document on SF 2008". It also examined in depth how science fiction input could be enhanced and successfully employed in various science communication modules currently in vogue in .
Taking into consideration the quality and sweep of the papers presented at the conference, it was decided by the office bearers of ISFWA to bring the select papers in a book form.
As stated above, preparation of the draft of the 'Benaras Document on SF 2008’ was one of the agenda of the conference , the book begins with the draft of Benaras Document 2008 and its critique by retired vice air marshal Shri Vishwa Mohan Tiwari. 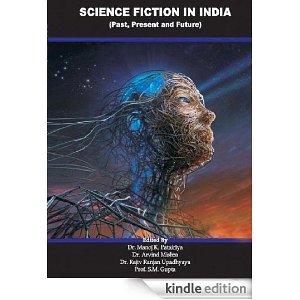 Here is a glimpse -sort of bird eye view of the content of the book and salient points of the papers included.
. In his paper Y.H. Deshpande  argues that SF with its futuristic vision enables man to face technological changes successfully. "Today's Science Fiction will be the science of tomorrow", says Dr. Deshpande. Like mainstream literature, science fiction deals with life. Rejecting the hypothesis that SF is of western origin, Deshpande contends that many stories of Mahabharata and the Ramayana are befitting Indian examples of SF.
Shri Yatindra Singh Hon. Justice Allahabad High Court and an sf aficionado himself in his paper 'Science Fiction: The Pied Piper of Science' present a lucid account of characteristics of sf and its historical background in detail and points to the topics such as space exploration, robotics, mathematics, artificial intelligence, surrogacy, cloning and stem cell research on which modern sf is based.
Mohan Sanjeevan in his paper 'Understanding SF' narrates how science fiction is a fine blending of science with fiction. He proves his point by giving illustrations of twelve sf  stories originally written in Tamil and translated into English by him in the Tamil collection entitled -"Vinveli Nilayam".
C.M. Nautiyal in his paper 'The Dividing Lines between Science Fiction, Science Fantasy and Fantasy: Perspective from Films" credits with the origin of the term 'Science Fiction'. Comparing sf with science fiction films, he states that both media are popular with the audience. He maintains that science technology is an integral part of Science Fiction. Further, fantasy is impossible made probable and science fiction  is improbable made possible. He averts that science fiction and science fantasy are overlapping categories.
Comparing fiction in general with Science Fiction in particular, Hemant Dwivedi states that mainstream fiction can learn from science fiction and vice versa for their betterment.
S.M. Gupta comprehensively surveys the development and evolution of Indian science fiction from adventure stories to Ashok Banker and Rana Das Gupta's ' The Tokyo Cancelled'. Bengali Science Fiction writers include Sukumar Ray and Satyajit Ray. So far as the development of science fiction in the world is concerned, Jules Verne is regarded as the father of science fiction. Among famous Science Fiction writers in and the are still H.G. Wells, Arthur C. Clarke and Asimov.
Nellai S Muthu in his detailed and informative paper entitled "Moon: Facts and Fictions" chronologically relates facts about the moon to the books produced as science fiction from 1634 onwards. Jules Verne's significant prediction in his sf 'From the Earth to the Moon' has similarity with real Apollo Program. Jules Verne's forecast about the three men traveling in a projectile to the moon in a weightless state proved  to be correct. We find for the first time, the concept that light could work as a form of propulsion for spacecraft. He quotes extensively from H.G. Wells' novels to prove that the world's first liquid propulsion engine for a rocket application was made. He refers to the lunar mission undertaken by , , and in  great detail including that of and the former president APJ Abdul Kalam's projections in World Space Vision 2050.
Jayaprakash D. in his paper "Science Fiction Films Help Make the World a " defines science films as the films that have a background of an advanced, functional technology that is normally set in the future. Then he presents a critique of the Day After Tomorrow (2004) film which in about the effects of global warming and climate shifts.
In his paper "H.G. Wells-Shaping Science Through Fiction" I Arul Aram gives a detailed summary of H.G. Wells ' The Time Machine" in which the protagonist tells the audience about his journey in the past and into the future. Interestingly enough, the novel hints at climate change due to global warming which may result in the extinction of human race in the distant future. The researcher also discusses Wells' other novels such as 'The Island of Doctor Moreau', 'The Invisible Man', 'The War of the Worlds' and 'The First Man in the Moon'. What Science Fiction writers can learn from H.G. Wells is the harmonization of science and ecology for human survival; marriage between science and social consciousness and lastly amalgamation of imagination and science for further development of science.
Ratnakar D. Bhelkar in his paper "Allien Encounter in C. Clarke's Childhood End" discusses the overlords' mission to save human race from its destructive use of science and they are victorious in creating an ideal world by the constructive use of science to restore peace and harmony as the face of the earth.
Pointing out the importance of Science Fiction Drama on radio, Harish Yadav in his paper "Science Fiction for Radio" argues that it not only provides entertainment to the listener but also enhances scientific temperament and develops scientific thinking in the masses.
Afrina Rizvi's paper - 'Science Content in Science Fiction " is concerned with the evaluation of scientific content as communication material in sf  by  following a methodology for comparative analysis based on Common Science Referring Terms (CSRT).
In his paper entitled "Science Fiction and Pragmatism" G.S. Unnikrishnan compares science fiction with mainstream literature and concludes that a good science fiction gets reclassified as mainstream fiction.
"There were several parallelisms between the social and political histories of Bengal and in the 19th Century," affirms Anwesha Maity in her paper 'Comparing Histories of Science Fiction: Bengal and '. Likewise, ‘similarities and evolutionary trends are visible in the science fiction of Japanese and Bengali languages,’ states the researcher and gives many examples of the books published on sf in both the languages.
Posted by Arvind Mishra at 7:14 PM 15 comments: