A report on Science Fiction Conference held in Mumbai,India.

The Indian National Science Fiction Conference was held February 10-11, 2015 at Elphinstone College in Mumbai, India. Elphinstone College is one of the oldest seats of learning in the country, established in 1776, and has produced a number of luminaries, including Balagangadhar Tilak and Babasaheb Ambedkar. The conference was organized by the college’s Department of English, and inaugurated by Dr. Srinarahari, the general secretary of the Indian Association for Science Fiction Studies. In his keynote address, Srinarahari discussed the increased impact of industrialization in India. He said the country is still basically an agricultural one, many people still believe in supernatural powers, and religious fanatics rebel against scientific progress in the name of protecting natural resources. Even educated people often promote bad science, and bad science fiction, in their ignorance. 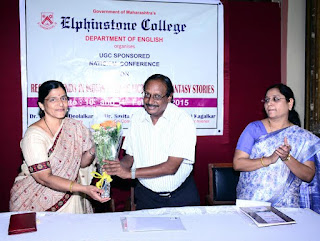 He also discussed the emergence of the second wave in the development of science fiction in India. After the publication of five major science fiction novels by astrophysicist Jayanth Narlikar, many scientists of the country followed his path in writing SF stories in order to popularize science; the journal 2001 interviewed Isaac Asimov via satellite; and the Indian Science Fiction Writers Association in north India and the Indian Association for Science Fiction Studies in south India were established. These were a few milestones of progress at the turn of the 21st century. In addition, women are often portrayed as physically fit, emotionally balanced, and intellectually equal to their male counterparts, unlike the more sexist portrayals of women in the past. He lamented the state of Indian SF cinema, noting that India recently celebrated the completion of 100 years of film making, starting with Raja Harishchandra in 1913. Most Indian films are either mythological or romantic. Among the innumerable Indian movies released so far, there are at least 54 SF films: 27 in Hindi, 13 in Tamil, five in Bengali, four in Malayalam, three in Marathi, one in Telugu, and one in Kannada.

The first was Kaadu (1953) in Tamil.And the most recent is Ra One (2011) in Hindi. Many of the films lack an element of real science, and the posters emphasize sexy heroines. These problems reflect the interest of the public at large, as well as the greediness of the producers, who want box office hits, whether the films are good SF or not. They don’t care about promoting SF in the country, their level of ambition is limited only to making money, and not projecting their talent at the global level, or gaining the awards a good SF film really deserves. On the other hand, CID Files, directed by DP Singh, has been the most popular serial on TV for 18 years. The common theme is about property issues, and highlights the forensic expertise of the characters most scientifically, and without the vulgarity or romanticism seen so often in popular Indian movies.

Srinarahari discussed the way eminent editors like Horace Gold, John W. Campbell, and others shaped American SF. In the early days of Indian SF, stories emerged from individual authors, mostly written in the vernacular language or in English, and editors were concerned only with bossing the sales of magazines, with work targeted toward readers with only a basic education. Those days have now changed. Editors like Geethanjali Dighe demand stories with plausible scientific prediction, and writers like Vandana Singh have changed the style of writing: one can find introspection now, ideas are paramount, and female characters have leadership roles and are mentally mature and emotionally balanced, unlike earlier sexist characterizations.


In SF, the writer explores the possibilities of the future rather than trying to make predictions. Some new SF writers have gathered in the online forum Sci-Fi Katta. Each member of the Katta posts a story, and the group discusses and critiques the work. This up-and-coming SF writers’ group operates in the western part of Maharashtra state, and is restricted to writings in the Marathi language. A few members of the group are Shivakumar Sonalkar, Prasanna Karandikar, and Smitha Potnis. They have lit a lamp, and one hopes the spirit of the movement will spread and illuminate other parts of India. 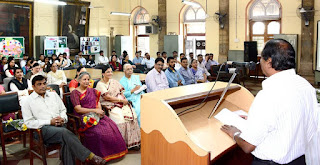 After the keynote, Dhananjay Deolakar welcomed the gathering, Principal Madhuri Kagalakar highlighted the achievements of the college and explained various programs conducted in recent years. Savitha Patil, head of the Department of English, thanked everyone for attending. The inaugural session was followed by a panel discussion on one of the themes of the conference: ‘‘Recent Trends in Fantasy in Indian works’’. English Professors Mabel Fernandez, Rambhau Badode, and Raj Rao concluded that currently Indian works fully explore not only their physical spaces but also take flight into eclectic mental spaces, spanning the worlds of the Ramayana and Mahabharata through Frankenstein and on to The Calcutta Chromosome.

Three papers were presented during the post-lunch session, and the chairperson acknowledged the changing trends in Indian SF styles and techniques. On the second day, Mabel Fernandez spoke on his areas of research in SF and fantasy stories. He was followed by Kishan Pawar, a screenwriter and film critic, whose speech focused on SF movies and television soaps. A.P. Pandey made a comparative study of Indian and world SF/F in his speech. In his valedictory speech, Deepak Nanaware appreciated the efforts made by the organizers in bringing together a number of people from all over India and presenting the delegates with a world of science fiction and fantasy together. There were 80 delegates enrolled for the conference, and 20 papers were presented within the themes of the conference, mainly ‘‘Indian Science Fiction & Fantasy and Indian Science Fiction Writers in Vernacular Languages.’’
(The report was originally published in Locus)
Contact Person:
Dr.MH.Srinarahari.
General Secretary,
Indian Association for Science Fiction Studies